About Our Coat of Arms 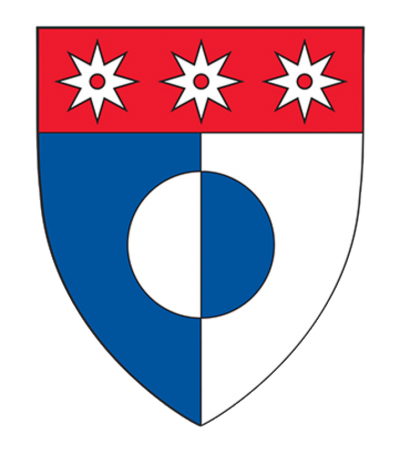 Many individuals of the Scottish Murray families bore arms with three five-pointed stars, usually on a blue field. Originally, these stars represented spur rowels (mullets) that were, accordingly, pierced for use. Almost certainly Pauli Murray would not have embraced traditional heraldry, but introducing the irony of making the innocuous Murray stars into spur rowels brings this shield into line with Pauli’s contributions to American society.
The three pierced, eight-pointed mullets can be seen to signify Murray’s work to “spur” changes in race relations, women’s rights, and the cultural prescription of gender identities.
The blue and white circle is conceptually derived from a mark that consistently appeared on Murray’s stationery. The counterchanging of its form reflects Pauli’s transformational activism and non-binary gender expression. The red, white, and blue color scheme references the flag of the United States of America—recognizing that this nation has been profoundly changed by Murray’s vision and actions.
Additional NavigationClose